17. Seven Founders of the Order of Servites, Religious

Seven Founders of the Order of Servites, Religious 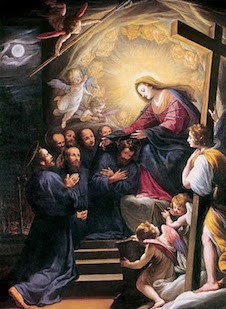 On the feast of the Assumption in 1233, seven members of a Florentine Confraternity devoted to the Holy Mother of God were gathered in prayer. The Blessed Virgin appeared to the young men, exhorting them to devote themselves to her service in retirement from the world.

With the approval of their Bishop, these zealous Christian who had once been prominent businessmen of Florence retired to Monte Senario, near Florence. They founded a new Order which, in recognition of the special manner of venerating the Seven Sorrows of Our Lady, was called “Servants of Mary,” or “Servites.”

PRAYER: Lord, infuse in us the piety of these holy brothers by which they devoutly venerated the Mother of God and led Your people toward You. Amen.
Saint of the Day
St. Maximinus of Trier, Bishop
We Remember
May
Merciful Jesus, grant them eternal rest.
Mass Schedule:
7:30 AMMonday:
7:30 AMTuesday:
7:30 AMWednesday:
7:30 AMThursday:
7:30 AMFriday:
8:00 AMSaturday:
8:00 AMSunday:
8:00 AMHolidays:
Holy Hour - Adoration:
Thursday before First Friday: 7:00 - 8:00 PM