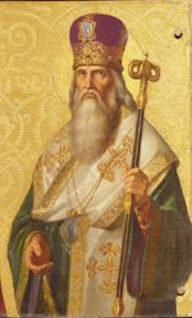 St. Tarasius was a subject of the Byzantine Empire. He was raised to the highest honors in the Empire as Consul, and later became first secretary to the Emperor Constantine and his mother, Irene. On being elected Patriarch of Constantinople, he consented to accept the dignity offered to him only on condition that a General Council should be summoned to resolve the disputes concerning the veneration of sacred images, for Constantinople had been separated from the Holy See on account of the war between the Emperors.

The Council was held in the Church of the Holy Apostles at Constantinople in 786; it met again the following year at Nicaea and its decrees were approved by the Pope.

The holy Patriarch incurred the enmity of the Emperor by his persistent refusal to sanction his divorce from his lawful wife. He witnessed the death of Constantine, which was occasioned by his own mother; he beheld the reign and the downfall of Irene and the usurpation of Nicephorus.

St. Tarasius’s whole life in the episcopacy was one of penance and prayer, and of hard labor to reform his clergy and people. He occupied the See of Constantinople twenty-one ears and two months. His charity toward the poor was one of the characteristic virtues of his life. He visited in person all the houses and hospitals in Constantinople, so that no indigent person might be overlooked in the distribution of alms. This saintly Bishop was called to his eternal reward in 806.

PRAYER: God, Light and Shepherd of souls. You established St. Tarasius as Bishop in Your Church to feed Your flock by his word and form it by his example. Help us through his intercession to keep the Faith he taught by his word and follow the way he showed by his example. Amen.
Saint of the Day
St. Maximinus of Trier, Bishop
We Remember
May
Merciful Jesus, grant them eternal rest.
Mass Schedule:
7:30 AMMonday:
7:30 AMTuesday:
7:30 AMWednesday:
7:30 AMThursday:
7:30 AMFriday:
8:00 AMSaturday:
8:00 AMSunday:
8:00 AMHolidays:
Holy Hour - Adoration:
Thursday before First Friday: 7:00 - 8:00 PM