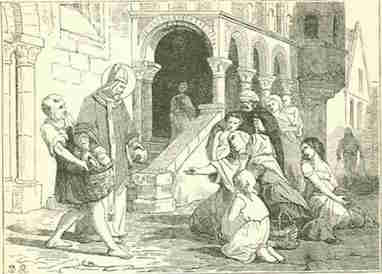 St. Eucherius was born in Orleans, France. His meditations on the Epistles of St. Paul influenced him to abandon the world in 714. He retired to the Abbey of Jumiege in the diocese of Rouen and soon acquired a reputation for sanctity.

When his uncle, Suaveric, Bishop of Orleans, died, the people named St. Eucherius to take his place. Charles Martel, mayor of the palace, who practically governed France, granted their request, despite his own lack of favor toward the Saint. Thus, St. Eucherius left his beloved solitude to assume the episcopal dignity in 721.

The Saint’s apostolic zeal was tempered with such meekness that he was beloved by all who knew him. After being sent into exile by Charles Martel, St. Eucherius retired to the monastery of St. Tron, where he spent the remainder of his life in prayer and contemplation. He died there about 738.

PRAYER: God, Light and Shepherd of souls, You established St. Eucherius as Bishop in Your Church to feed Your flock by his word and form it by his example. Help us through his intercession to keep the Faith he taught by his word and follow the way he showed by his example. Amen.
Saint of the Day
St. Finbar, Bishop St. Cleopas, Disciple of Christ
We Remember
September
Merciful Jesus, grant them eternal rest.