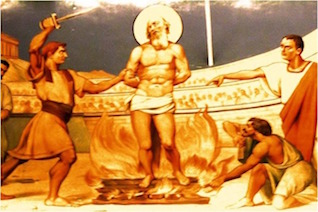 We are acquainted with the life of this Saint from his Acts, composed by the Church of Smyrna, and abridged by Eusebius. They form a very authentic document of Christian antiquity.

St. Polycarp embraced Christianity while very young, about the year 80, and became a disciple of St. John the Evangelist who made him Bishop of Smyrna, probably before his own exile to Patmos in 96. Polycarp governed that See for seventy years, and among his disciples were St. Irenaeus and the writer Papias. The former has recorded that his master knew St. John and others who had seen Jesus.

From Eusebius, St. Irenaeus, and St. Jerome we learn that about the year 158 Dt. Polycarp went to Rome to consult Pope Anicetus regarding the date of the Easter celebration, as there was a difference between the East and the West. It was agreed that both might follow their own custom. In the fourth general persecution, under the Emperor Lucius Versus and Marcus Aurelius, the Saint was apprehended and brought before the proconsul. Refusing to deny Christ, he was condemned to be burned.

The authors of the Act tell that they were witnesses of the fact that the flames did not touch Polycarp, but formed an arch over his head. thereupon, he was pierced with a sword; such a great amount of blood issued from the wound that it extinguished the fire. The death of the Saint occurred about the year 155. His body was burned, but his bones are preserved in the Church of San Ambrogio in Rome.

PRAYER: God of all creation, You led St. Polycarp into the company of the Martyrs. Through his intercession we ask that, as we share in Christ’s cup of suffering, we may one day rise to eternal life. Amen.
Saint of the Day
3. St. Katharine Drexel, Virgin3. St. Cunegundes, Empress
We Remember
March
Merciful Jesus, grant them eternal rest.
Mass Schedule:
7:30 AMMonday:
7:30 AMTuesday:
7:30 AMWednesday:
7:30 AMThursday:
7:30 AMFriday:
8:00 AMSaturday:
8:00 AMSunday:
8:00 AMHolidays:
Holy Hour - Adoration:
Thursday before First Friday: 7:00 - 8:00 PM