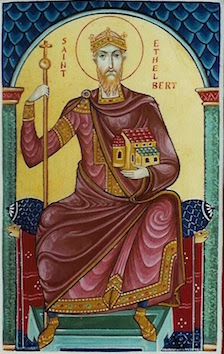 St. Ethelbert was a descendent of Hengist, the legendary ancestor of the Jutish House of Kent. He became King in 560 and extended his power to all England south of the Humber. He married a Christian princess, Bertha, who was the daughter of the Frankish King Charibert. This resulted in the first introduction of Christianity into Anglo-Saxon England, since her father insisted that his daughter should be free to practice her Faith in England.

When St. Augustine of Canterbury arrived in England in 597 with his Roman mission, he was accorded a pleasant welcome by Ethelbert who was himself still a heathen. Inspired by the example of his wife’s Faith as well as St. Augustine’s zeal, Ethelbert was converted and baptized on Pentecost in 597. He thus became the first Christian English King and thereafter gave his full support to the cause of Christ in his realm.

St. Ethelbert was constantly concerned to promote the welfare of his people. He enacted wholesome laws that were held in esteem in succeeding ages in England. He abolished the worship of idols throughout his kingdom and turned their temples into churches or shut them down. He was also instrumental in converting Sebert, King of the East Saxons, with his people, and Redwald, King of the East Angles. He died in 616 after reigning fifty-six years.

PRAYER: Lord God, You alone are holy and no one is good without You. Through the intercession of St. Ethelbert help us to live in such a way that we may not be deprived of a share in Your glory. Amen.
Saint of the Day
St. Maximinus of Trier, Bishop
We Remember
May
Merciful Jesus, grant them eternal rest.
Mass Schedule:
7:30 AMMonday:
7:30 AMTuesday:
7:30 AMWednesday:
7:30 AMThursday:
7:30 AMFriday:
8:00 AMSaturday:
8:00 AMSunday:
8:00 AMHolidays:
Holy Hour - Adoration:
Thursday before First Friday: 7:00 - 8:00 PM