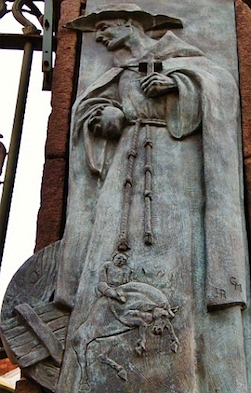 Born in 1502 into a poor family of Galicia, Spain, Sebastian worked at a domestic servant and laborer. In 1531, he emigrated to Mexico, settling first in Varacruz and later in Puebla of the Angels. After transporting freight and then mail, he became rich by building roads. Yet, he continued to lead a simple life, sleeping on a mat and eating the poorest food while contributing generously to the needy.

In 1552, Sebastian retired to a place near Mexico City where he cultivated the ground and bred livestock. Later at over sixty years of age he wed twice—but each time he was quickly widowed. At the age of seventy, he felt the call to the religious life. Giving all his wealth to the Poor Clares, he joined the Franciscans in Mexico City.

Sebastian was sent to Tecali then to a community of more than a hundred friars in Puebla of the Angels, where he spent the last twenty-five years of his life. He became a begging brother. To obtain food for such a large community, he had to use large carts, drawn by oxen, and traveled donated by charitable people.

Sebastian worked day and night without complaining and in union with his Redeemer. as a result, the images of this venerable old man and his large cart have remained inseparably linked in the history and traditions of the City of Puebla of the Angels. He died in 1600, at the advanced age of ninety-eight and was beatified in 1787 by Pope Pius VI.

PRAYER: O God, You were pleased to give us Blessed Sebastian as a model and exemplar of Christian charity by sanctifying the activities of his daily life. Through his intercession, enable us to serve You ever with a pure heart in all the circumstances of our lives. Amen.
Saint of the Day
St. Anselm, Bishop and Doctor of the Church St. Apollonius, Martyr
We Remember
April
Merciful Jesus, grant them eternal rest.
Mass Schedule:
7:30 AMMonday:
7:30 AMTuesday:
7:30 AMWednesday:
7:30 AMThursday:
7:30 AMFriday:
8:00 AMSaturday:
8:00 AMSunday:
8:00 AMHolidays:
Holy Hour - Adoration:
Thursday before First Friday: 7:00 - 8:00 PM