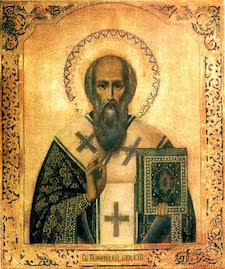 St. Porphyrius was born at Thessalonica in Macedonia. In 387, at the age of twenty-five, he left home and friends to consecrate himself to God among the monks of Scete in Egypt. After five years spent there in monastic exercises, he went to Palestine to visit the holy places of Jerusalem, and then took up his abode in cave near the Jordan, where he passed five more years.

One day while praying on Mount Calvary St. Porphyrius was miraculously cured of an illness; not a trace of the disease was left. In 393, the Bishop of Jerusalem, much against the wishes of the Saint, ordained him priest and committed to him keeping of the Holy Cross. In 396, John, Archbishop of Caesarea, employed a ruse to make him Bishop of Gaza. He sent for him on the plea of wishing to consult him, and when he had him in his power he imposed upon him episcopal consecration.

St. Porphyrius died on February 26, 421. His life, written by his faithful disciple and companion Mark, is an important source of information about paganism in the Christian East.

PRAYER: God, You made St. Porphyrius an outstanding exemplar of Divine love and the Faith that conquers the world, and added him to the roll of saintly pastors. Grant by his intercession that we may persevere in Faith and love and become sharers of his glory. Amen.
Saint of the Day
St. Maximinus of Trier, Bishop
We Remember
May
Merciful Jesus, grant them eternal rest.
Mass Schedule:
7:30 AMMonday:
7:30 AMTuesday:
7:30 AMWednesday:
7:30 AMThursday:
7:30 AMFriday:
8:00 AMSaturday:
8:00 AMSunday:
8:00 AMHolidays:
Holy Hour - Adoration:
Thursday before First Friday: 7:00 - 8:00 PM