27. St. Gabriel of Our Lady of Sorrows, Cleric

St. Gabriel of Our Lady of Sorrows, Cleric 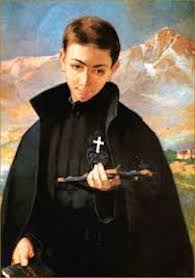 Patron of Clerics and Youth

Born in 1838, this Saint of modern times was originally named Francis after the great Saint of his native city Assisi. He attended the Jesuit college of Spoleto, where was a great favorite with his fellow students and professors. Fastidious in manner and dress, he was found of literature and the theater. However, he decided to leave the world after being miraculously cured from two bouts of illness.

Francis was guided by our Lady into the Passionist Institute, where he took the name Gabriel and became a veritable Apostle of her Sorrows. In 1862, at twenty-four years of age, he died of tuberculosis, having already attained to a heroic degree of sanctity by a life of self-denial and great devotion to Our Lord’s Passion. He was canonized in 1920 by Pope Benedict XV and is the Patron of youth, especially of young religious.

Gabriel, in life, did not perform any miraculous events, but after his death (in 1862) many miraculous occurred at his tomb in Isola di Gran Sasso, Italy.

PRAYER: Lord, You inspired St. Gabriel of our Lady of Sorrows with a special love for Your Mother and compassion for her sorrows. Through her, You raised him to the heights of holiness. Grant us great devotion to her sorrows, that we may known her as our loving Mother. Amen.
Saint of the Day
St. Maximinus of Trier, Bishop
We Remember
May
Merciful Jesus, grant them eternal rest.
Mass Schedule:
7:30 AMMonday:
7:30 AMTuesday:
7:30 AMWednesday:
7:30 AMThursday:
7:30 AMFriday:
8:00 AMSaturday:
8:00 AMSunday:
8:00 AMHolidays:
Holy Hour - Adoration:
Thursday before First Friday: 7:00 - 8:00 PM