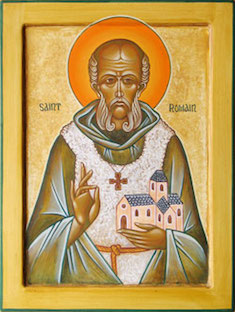 St. Romanus, at the age of thirty-five, left his family and entered a monastery at Lyons. Here he remained a short time before taking with him the constitutions and conferences of the celebrated monastic author, Cassian, to retire to a spot in the solitude of Mont Jura. His occupation consisted in prayer, reading and manual labor. Later his brother Lupicinus and some other joined him. These were followed ba such a large number that it became necessary to erect two monasteries, as well as one for women.

The two brothers governed their monasteries in great harmony. The abstinence they prescribed for their monks was milder than that observed by the Orientals and by the monks of Lerins. The principal reason for this was that the physical constitution of the Gauls required more nourishment. However, they always abstained from every kind of meat, and only used milk and eggs in time of sickness.

St. Romanus died in 463 on his turn from a pilgrimage. Lupicinus toiled for seventeen more years on earth and also achieved the crown of sanctity—his feast is on March 21.

PRAYER: Lord, amid the things of this world, let us be wholeheartedly committed to heavenly things in imitation of the example of evangelical perfection You have given us in St. Romanus. Amen
Saint of the Day
St. Maximinus of Trier, Bishop
We Remember
May
Merciful Jesus, grant them eternal rest.
Mass Schedule:
7:30 AMMonday:
7:30 AMTuesday:
7:30 AMWednesday:
7:30 AMThursday:
7:30 AMFriday:
8:00 AMSaturday:
8:00 AMSunday:
8:00 AMHolidays:
Holy Hour - Adoration:
Thursday before First Friday: 7:00 - 8:00 PM