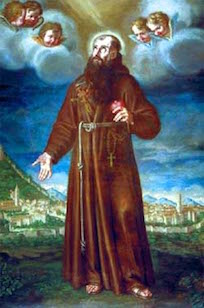 Eufranio Desideri was born in 1556 at Leonessa, in Umbria, Italy, and pursued higher studies at Viterbo. At eighteen he rejected an offer of a noble and lucrative marriage.

Instead, Eufranio joined the Capuchin Franciscans at Viterbo. Taking the name of Joseph, he became a humble, and obedient religious, mortified to a heroic degree. He believed deeply and preached constantly that every Christian must be a living book in which others can read the teaching of the Gospel.

In 1587, Joseph was sent to Turkey as a missionary among the Christians at Pera, a suburb of Constantinople. He served the Christian galley slaves of the Turks and preached the Faith to the Moslems, making himself liable for imprisonment under Turkish law.

Joseph was imprisoned twice and ultimately sentenced to a cruel death. His right hand and foot were pierced with hooks and hung over a weak fire for three days. On the fourth day, he was miraculously released and his sentence commuted to banishment.

The Saint returned to Leonessa and continued to labor with great success in apostolic endeavors, being favored with God’s gifts. Worn out by his labors, Joseph died at Amatrice, Italy, on February 4, 1612, and was canonized in 1745 by Pope Benedict XIV.

PRAYER: O God, You made St. Joseph and illustrious preacher of the Gospel. Through his intercession, enkindle us with love and with his zeal for souls that we may serve You alone. Amen.
Saint of the Day
St. Maximinus of Trier, Bishop
We Remember
May
Merciful Jesus, grant them eternal rest.
Mass Schedule:
7:30 AMMonday:
7:30 AMTuesday:
7:30 AMWednesday:
7:30 AMThursday:
7:30 AMFriday:
8:00 AMSaturday:
8:00 AMSunday:
8:00 AMHolidays:
Holy Hour - Adoration:
Thursday before First Friday: 7:00 - 8:00 PM