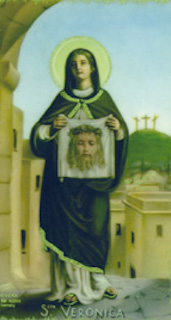 Patroness of Dressmakers and Photographers

St. Veronica, a pious matron of Jerusalem, is not mentioned in the Bible, but is known to us by Catholic tradition and in the Sixth Station of the Cross, "Veronica Wipes the Face of Jesus."

Legend states that as Christ was walking to Calvary, his face dripping with sweat and blood, Saint Veronica, a bystander, was moved with compassion. She approached Jesus and offered Him a cloth, likely her veil, which He accepted and used to wipe His face. The image of his face was subsequently imprinted on the cloth.

There are no legends from the period which speak of Veronica either before or after her act of compassion. We do not know when she was born or when she died. She is literally lost to history.

At Italian legend records that St. Veronica cured Emperor Tiberius with this image called Veronica’s Veil and later left it in the care of Pope Clement and his successors.

Although this Saint has never been listen in the Martyrology, her story has had a wide appeal to Christians over the centuries. For it vividly illustrates a truth that is relevant for all time and all peoples: the theme of compassion for Christ in His sufferings.