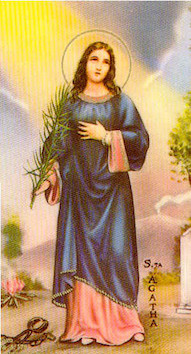 St. Agatha, an illustrious Sicilian virgin, noble by birth but more so by her heroic virtue, was martyred (at Catania in 251 during the Decian persecution) for refusing the solicitations of a Roman senator.

The Saint’s martyrdom and early cult are historically certain, but the details are legendary. According to a legend of the 6th century, the Roman senator, whose name was Quintanius, had St. Agatha subjected to various cruel tortures including cutting off her breasts. When she continued to resist, she was thrown upon red-hot coals. At this point, a violent earthquake shook the town. Quintanius, fearing that people would rise up in protest, had Agatha returned to prison, where she died of her tortures.

In addition to being patroness of nurses, St. Agatha is invoked against earthquakes and diseases of the breast. Her name is contained in Eucharistic Prayer I at Mass.

PRAYER: Lord God, St. Agatha always pleased You by her chastity and in the end her martyrdom. May she obtain for us merciful pardon for our sins. Amen.
Saint of the Day
St. Maximinus of Trier, Bishop
We Remember
May
Merciful Jesus, grant them eternal rest.
Mass Schedule:
7:30 AMMonday:
7:30 AMTuesday:
7:30 AMWednesday:
7:30 AMThursday:
7:30 AMFriday:
8:00 AMSaturday:
8:00 AMSunday:
8:00 AMHolidays:
Holy Hour - Adoration:
Thursday before First Friday: 7:00 - 8:00 PM