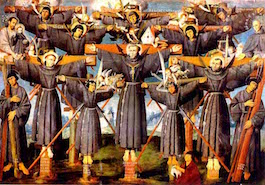 In 1597, forty-five years after Francis Xavier had evangelized much of Japan, St. Paul Miki and twenty-five others were martyred for the Faith after being led to the place of execution near Nagasaki by a spectacular journey intended to impress the population. The martyrdom was spurred on by a Spanish captain’s statement that the missionaries were paving the way for the Spanish and Portuguese conquest of Japan.

Among those martyred were three Japanese Jesuits: Paul Miki, John Goto, James Kisai; six Franciscans, four of whom were Spanish: Peter Baptist, Martin de Aguirre, Francis Blanco, Francis-of-St.-Michael; one Mexican: Philip de las Casas; and one Indian: Gonsalo Garcia; the other seventeen were Japanese: lay people including a soldier, physician, and altar boys. All were pierced with a lance like their Savior. With their canonization in 1862 by Pope Pius IX, they became the protomartyrs of the whole Far East.

PRAYER: Lord God, You are the strength of all the Saints. You called Sts. Paul Miki and Companions to eternal life through the Cross. Grant us, through their intercession, perfect fidelity to keep the Faith until our death. Amen.
Saint of the Day
St. Maximinus of Trier, Bishop
We Remember
May
Merciful Jesus, grant them eternal rest.
Mass Schedule:
7:30 AMMonday:
7:30 AMTuesday:
7:30 AMWednesday:
7:30 AMThursday:
7:30 AMFriday:
8:00 AMSaturday:
8:00 AMSunday:
8:00 AMHolidays:
Holy Hour - Adoration:
Thursday before First Friday: 7:00 - 8:00 PM