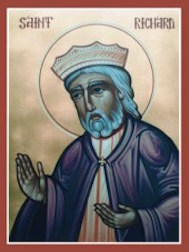 St. Richard was a prince of the West Saxons in the 8th century but he was accorded the title of King by his people who held him in great veneration. We know little about him, but the most telling point is the sainthood of his three children: Willibald, Wunibald, and Walburga.

Taking his two sons, Willibald who was a Benedictine monk at the monastery of Waltham, and Wunibald, this saintly man undertook a pilgrimage to Rome. After staying at Rouen for some time, they continued through France and northern Italy despite severe hardships. On the way they visited churches and shrines and nourished their faith and devotion. Exhausted by the lengthy and difficult journey, St. Richard died at Lucca in Italy about the year 720 and enjoys great veneration there.

The Saint’s sons helped their uncle, St. Boniface, the apostle of Germany, to evangelize the Franks. His daughter became abbess of Heidenheim and ran a school for the children of Frankish nobles.

PRAYER: Lord God, You alone are holy and no one is good without You. Through the intercession of St. Richard help us to live in such a way that we may not be deprived of a share in Your glory. Amen.
Saint of the Day
St. Maximinus of Trier, Bishop
We Remember
May
Merciful Jesus, grant them eternal rest.
Mass Schedule:
7:30 AMMonday:
7:30 AMTuesday:
7:30 AMWednesday:
7:30 AMThursday:
7:30 AMFriday:
8:00 AMSaturday:
8:00 AMSunday:
8:00 AMHolidays:
Holy Hour - Adoration:
Thursday before First Friday: 7:00 - 8:00 PM