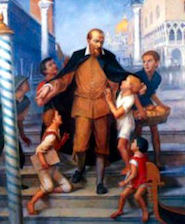 Bon in 1481, St. Jerome was a Venetian nobleman who joined the army and was taken prisoner. After a miraculous liberation, attributed to the intercession of the Blessed Virgin, he decided to begin a new life entirely devoted to charity toward the poor, especially orphans.

The Saint was ordained at thirty-seven and plunged into his real life’s work. Around 1530, he founded the first known orphanage of modern times and in the ensuing years he founded many more, as well as hospitals and institutes for fallen women.

in 1532, St. Jerome established the congregation of Clerks Regular of Somascha, which looked after the education of youth in colleges, academies, and seminaries. He was the first to teach children the Faith by using questions and answers. St. Jerome died in 1537, a victim of an epidemic then raging, while ministering to those stricken by it. He was canonized in 1767 by Pope Clement XIII.

PRAYER: God, Father of mercies, You made St. Jerome the helper and father of orphans. By his intercession help us to preserve that spirit of adoption by which we are called, and really are, Your children. Amen.
Saint of the Day
St. Maximinus of Trier, Bishop
We Remember
May
Merciful Jesus, grant them eternal rest.
Mass Schedule:
7:30 AMMonday:
7:30 AMTuesday:
7:30 AMWednesday:
7:30 AMThursday:
7:30 AMFriday:
8:00 AMSaturday:
8:00 AMSunday:
8:00 AMHolidays:
Holy Hour - Adoration:
Thursday before First Friday: 7:00 - 8:00 PM