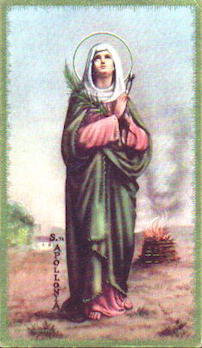 St. Apollonia was a deaconess of advanced age and noted sanctity who suffered martyrdom during the persecution of Decius about 250. After a life spent in self-sacrifice and works of charity, this holy woman fell prey to a howling mob venting its fury on any Christians it could find. Enraged at her courageous refusal to sacrifice to idols, some in the mob struck out at her and knocked out all her teeth.

St. Apollonia was then threatened with being burnt alive in a fire that was enkindled. She asked for a few moments to think things over. Then, so anxious was she embrace martyrdom that she tore free from the hands of her tormentors and, prompted by the Holy Spirit, leapt into the fire before they were ready. And the pagans remained amazed to see a weak woman more anxious to die for Christ that the cruel pagans were to torment her. she is invoked against toothaches and dental diseases.