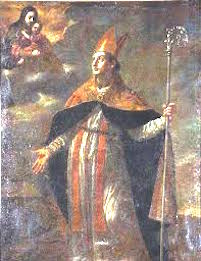 St. Paulinus was born about 726 on a country farm near Friuli, Italy. He spent his youth tilling the soil for engage in scholarly pursuits. So adept did he became at these pursuits that he gained a reputation as a grammarian and professor, and was invited by Charlemagne to come to his court, around 776. Here he met the noted Alcuin of York, and the two became fast friends.

In 787, the Emperor appointed Paulinus Patriarch of Aquileia near his birthplace in northern Italy, and he gave great luster to that Church by his outstanding zeal, solid piety, and extraordinary talents. He attended all the great councils that were convoked in his day, and he himself called a synod at Friuli in 791 (or 796) to combat the errors than circulating against the mystery of the Incarnation. He even wrote two tracts against the more serious of these errors, Adoptionism, which maintained that Christ as man is only the adoptive Son of God. He also wrote hymns, poems, and other works.

When Pepin conquered the Avars, St. Paulinus immediately dispatched missionaries to convert these pagans who were now accessible to the Faith. However, he vigorously condemned the practice that in vogue of baptizing uninstructed converts or imposing Faith by force on unwilling ones. On January 11, 802, the earthly life of this holy man came to an end.

PRAYER: God, You made St. Paulinus an outstanding exemplar of Divine love and the Faith that conquers the world, and added him to the roll of saintly Pastors. Grant by his intercession that we may persevere in Faith and love and become sharers of his glory. Amen.
Saint of the Day
The First Holy Martyrs of the Holy Roman Church
We Remember
June
Merciful Jesus, grant them eternal rest.
Mass Schedule:
7:30 AMMonday:
7:30 AMTuesday:
7:30 AMWednesday:
7:30 AMThursday:
7:30 AMFriday:
8:00 AMSaturday:
8:00 AMSunday:
8:00 AMHolidays:
Holy Hour - Adoration:
Thursday before First Friday: 7:00 - 8:00 PM