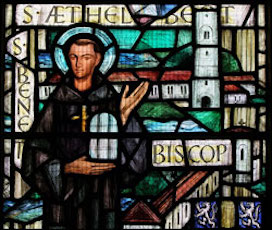 St. Benedict, or Bennet as he is commonly called, was of noble birth and as officer of the court of Oswi, the religious king of Northumberland, England, in the 7th century. At the age of twenty-five he left the world, made a journey of devotion to Rome, and in his return applied himself to the study of Scripture and the practice of pious exercises. After spending two years at the renowned monastery of Lerins and receiving the habit there, he accompanied St. Theodore, Archibishop of Canterbury, and St. Adrian to England at the request of Pope Vitalian.

Benedict returned to Rome a few more times to study the various religious disciplines and collect books and pictures of the Saints. After serving under Theodore and Adrian, he was given a grant by the King of Northumberland and built the famous monastery of Weremouth, bringing over from France stonemasons and glaziers to construct it according to the Roman models he had seen. He also built another monastery six miles away at Jarrow, and ruled both since they were regarded as one.

In his zeal to make his monastery as close to the Roman models as possible, Benedict prevailed upon Pope Agatho to let him take back to England the precentor of St. Peter’s in Rome to teach the monks Gregorian Chant. After suffering from severe illness for three years, this holy and zealous worker of God died in January, 690.

PRAYER: Lord, amid the things of this world, let us be wholeheartedly committed to heavenly things in imitation of the example of evangelical perfection You have given us in St. Benedict the Abbot. Amen.
Saint of the Day
The First Holy Martyrs of the Holy Roman Church
We Remember
June
Merciful Jesus, grant them eternal rest.
Mass Schedule:
7:30 AMMonday:
7:30 AMTuesday:
7:30 AMWednesday:
7:30 AMThursday:
7:30 AMFriday:
8:00 AMSaturday:
8:00 AMSunday:
8:00 AMHolidays:
Holy Hour - Adoration:
Thursday before First Friday: 7:00 - 8:00 PM