13. St. Hilary, Bishop and Doctor of the Church

St. Hilary, Bishop and Doctor of the Church 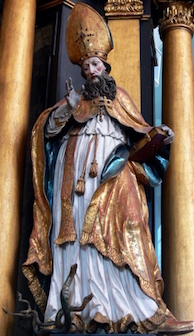 St. Hilary was born at Poitiers, France, of one of the most noble families of Gaul. He was brought up as a pagan. His own philosophic inquiries and the reading of the Bible led him to the knowledge of the true Faith and the reception of the Sacrament of Baptism. He then regulated his life according to the rules of the Faith he had embraced, and, though a layman, zealously endeavored to confirm others in true Christianity.

His wife, to whom he had been married before his conversion and by whom he had a daughter named Apra, was still living when Hilary was chosen Bishop of Poitiers, about the year 353. According to the practice which then existed, married men were sometimes promoted to the episcopacy, but as St. Jerome clearly testifies, they ever after lived un continence.
The Arian heresy principally occupied the Saint’s pen, and he became one of the most strenuous defenders of the Divinity of Jesus Christ. At the Council of Seleucia, in 360, he bravely defended the decrees of Nicaea, and then retired to Constantinople.

St. Hilary died at Pointieres in the year 367. He was the mildest of men, full of condescension and affability to all, but against Emperor Constantius, who showed himself an enemy of the Church, he used the severest language. He is invoked against snake bites.