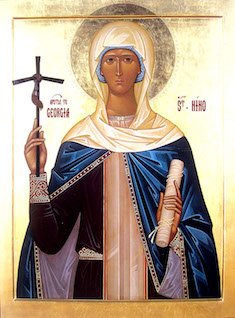 Christianity was first brought to Georgia, Iberia, and the end of the 3rd century, and ancient tradition attributes this fact to the witness and apostolate of St. Nino. Many legends were in time woven around this Saint (called simply “Christiana,” “the Christian Woman,” by the Roman Martyrology and Nino by the Georgians). But the most trustworthy account is still the most ancient and simplest one recorded, which Prince Bakur of Georgia gave to Rufinus of Aquileia, the 4th century Church historian.

Captured and brought to Georgia as a slave, Nino impressed the populace by her goodness and religious devotion, as well as by her power to cure decease in the name of Christ her God. Her prayers obtained the cure of a dying child, brought the Queen herself back from sickness, and enabled the King—when lost while hunting—to find his way again by calling on Christ. Both rulers received instruction and Baptism from Nino, and she was free to teach and preach.

Under Nino’s direction, a church was erected in such wondrous fashion that the people began to clamor to become Christians also. Hence, the King sent a legate to Emperor Constantine, asking for Bishop and priests to continue and extend St. Nino’s work, and so the Faith came to this region along the Black Sea.

PRAYER: God, through St. Nino, Your Virgin, You enabled those without the Faith to pass from darkness to the light of truth. Grant us through her intercession to stand fast in the Faith and remain constant in the hope of the Gospel that she preached. Amen.
Saint of the Day
The Conversion of St. Paul, Apostle
We Remember
January
Merciful Jesus, grant them eternal rest.
Mass Schedule:
7:30 AMMonday:
7:30 AMTuesday:
7:30 AMWednesday:
7:30 AMThursday:
7:30 AMFriday:
8:00 AMSaturday:
8:00 AMSunday:
8:00 AMHolidays:
Holy Hour - Adoration:
Thursday before First Friday: 7:00 - 8:00 PM