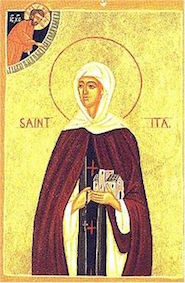 St. Ita was born in country Waterfold toward the end of the 6th century. Though she came from a noble family she decided early in life to dedicate herself to God. She organized a convent in Killeedy, County Limerick, where she remained all her life, and which became famous as a training school for little boys.

St. Ita’s counsel was sought by bishops and she was instrumental in training two boys who went on to become Saints: Brendan and Mochoemoc. One day Brendan asked her what three things God loved in a special way, and her reply was: “True faith in God with a pure heart, a simple life with a religious spirit, and an open hand inspired by charity.” Asked which three things God especially abhorred, she responded: “A scowling face, obstinacy in wrongdoing, and arrogant trust in the power of money.”

St. Ita died on January 15, 570, and is known as the second Bridgid. The are the most glorious women Saints of the Celtic Church.

PRAYER: Lord God, You showed heavenly gifts on St. Ita the Virgin. Help us to imitate her virtues during our earthly life and enjoy eternal happiness with her in heaven. Amen.
Saint of the Day
5. Dedication of Our Lady of the Snows
We Remember
August
Merciful Jesus, grant them eternal rest.
Mass Schedule:
7:30 AMMonday:
7:30 AMTuesday:
7:30 AMWednesday:
7:30 AMThursday:
7:30 AMFriday:
8:00 AMSaturday:
8:00 AMSunday:
8:00 AMHolidays:
Holy Hour - Adoration:
Thursday before First Friday: 7:00 - 8:00 PM