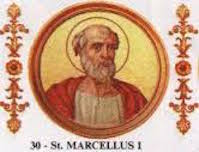 Patron of Groomers of Horses

St. Marcellus was elected pope in 307, the last year of the persecution of the Church by Diocletian. He undertook the ecclesiastical reorganization of the Church and was most merciful to those who repent after having denied their Faith.

When certain people known as the Lapsi refused to do penance for their apostasy and thus were not pardoned by St. Marcellus, the tyrant Emperor Maxentius sent St. Marcellus into exile, where he died in 309 as a result of privations.

PRAYER: Almighty and eternal God, You willed to sent St. Marcellus over Your entire people and to go before them in word and example. By his intercession keep the pastors of Your Church together with their flocks and guide them in the way of eternal salvation. Amen.
Saint of the Day
St. Thomas Aquinas, Priest and Doctor of the Church
We Remember
January
Merciful Jesus, grant them eternal rest.
Mass Schedule:
7:30 AMMonday:
7:30 AMTuesday:
7:30 AMWednesday:
7:30 AMThursday:
7:30 AMFriday:
8:00 AMSaturday:
8:00 AMSunday:
8:00 AMHolidays:
Holy Hour - Adoration:
Thursday before First Friday: 7:00 - 8:00 PM