2. Sts. Basil the Great and Gregory Nazianzen, Bishops and Doctors of the Church

Sts. Basil the Great and Gregory Nazianzen, Bishops and Doctors of the Church 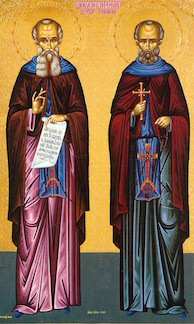 In the revision of the calendar the Church has seen fit to honor these two great Doctors of the Church and fast friends on the same day.

St. Basil the Great was born at Caesarea of Cappadocia in 330. Both of his parents and several of his brothers and sisters are honored among the Saints. He attended school in Caesarea, as well as Constantinople and Athens, where he became acquainted with St. Gregory Nazianzen in 352. A little later, he opened a school of oratory in Caesarea and practiced law.

Eventually St. Basil decided to become a monk and founded a monastery in Pontus which he directed for five years. He wrote a famous monastic Rule that has proved the most lasting of those in the East. After founding several other monasteries, he was ordained and, in 370, made Bishop of Caesarea. In this post (until his death in 379) he constituted to be a man of vast learning and constant activity, genuine eloquence and immense charity. This earned for him the title of “Great” during his life and Doctor of the Church after his death.

St. Gregory, Patron of Christian Poets, was born at Arianzen in Cappadocia of parents who both honored among the Saints. He studied at Caesarea, Alexandria, and Athens, in which latter city he had as fellow pupils St. Basil and Julian the Apostate. On his return to Nazianzen he was baptized by his father and began to lead a most holy life. In 358, he joined St. Basil in the solitude of Pontus and remained until his father (who was Bishop of Nazianzen) recalled him shortly after and ordained him a priest, much against his wishes. He was appointed Bishop of Sasima, a small town, in 372 by St. Basil.

St. Gregory preferred a life of quiet solitude and reflection, but circumstances always conspired to call him away from it. In 379, he was made Bishop of Constantinople and remained there until 381 when he was finally able to resign and return to his solitude up to his death in 389. The depth of his theological knowledge and the vastness of his eloquence have made him one of the greatest Doctors of the Greek Church.

PRAYER: Lord God, You desired to enlighten Your Church by the life and teachings of Sts. Basil and Gregory. Grant that we may learn Your truth with humility and faithfully put it into practice with love. Amen.
Saint of the Day
8. Immaculate Conception of the Blessed Virgin Mary
We Remember
December
Merciful Jesus, grant them eternal rest.
Mass Schedule:
7:30 AMMonday:
7:30 AMTuesday:
7:30 AMWednesday:
7:30 AMThursday:
7:30 AMFriday:
8:00 AMSaturday:
8:00 AMSunday:
8:00 AMHolidays:
Holy Hour - Adoration:
Thursday before First Friday: 7:00 - 8:00 PM