St. Fabian was Pope from 236 to 250, succeeding St. Anterus. He sent St. Dionysius and another preachers of the Gospel into Gaul, and condemned Privatus, the originator of a new heresy in Africa. St. Cyprian, who relates this latter fact, calls this Pope an incomparable man. St. Fabian suffered martyrdom in the year 250, in the seventh general persecution under the Emperor Decius.

PRAYER: Lord God, You are the glory of priests. Through the prayers of the Martyr St. Fabian may we make progress in Faith and in fitting service. Amen. 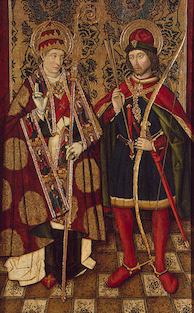 St. Sebastian, Patron of Athletes and Soldiers, was born at Narbonne in Gaul, educated at Milan, and martyred at Rome about the beginning of the 4th century.

According to an account of the 5th century now considered unhistorical, St, Sebastian entered the army at Rome under the Emperor Carinus, about the year 283, in order to render assistance to the Martyrs. When Diocletian left for the East, St. Sebastian continued to enjoy the esteem of Maximian, his coadjutor in the Empire.

St. Sebastian had prudently concealed his religion, but he was at last detected and accused before Diocletian, who condemned him to be shot to death by arrow. The sentence was executed to the extent that he was left for dead.

Restored to health by the care of a pious widow, the Saint boldly appeared before the Emperor and reproached him for his injustice against the Christians. The Emperor, recovering from his surprise at beholding St. Sebastian alive, commanded that he be beaten to death with clubs. His body was thrown into a sewer; but a pious lady had it privately removed, and buried it in the catacombs.

PRAYER: Lord, grant us a spirit of strength. Taught by the glorious example of Your Martyr St. Sebastian, may we learn how to obey You rather than men. Amen.
Saint of the Day
The First Holy Martyrs of the Holy Roman Church
We Remember
June
Merciful Jesus, grant them eternal rest.
Mass Schedule:
7:30 AMMonday:
7:30 AMTuesday:
7:30 AMWednesday:
7:30 AMThursday:
7:30 AMFriday:
8:00 AMSaturday:
8:00 AMSunday:
8:00 AMHolidays:
Holy Hour - Adoration:
Thursday before First Friday: 7:00 - 8:00 PM