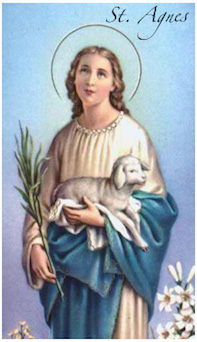 St. Agnes suffered martyrdom during the bloody persecution of the Emperor Diocletian around 304 at the age of the thirteen and became one of the best known and most highly regarded of the Roman Martyrs. Her name is still retained in the First Eucharistic Prayer for Holy Mass.

The Acts of the Saint’s Passion, which date back only to the 5th century, are considered to be not entirely reliable but they do tell us something about her. The young noblemen of Rome, attracted by her wealth and beauty, vied with one another in endeavoring to obtain her hand in marriage, but she refused them all, saying that she had chosen a Spouse Who could not be seen with mortal eyes. Her suitors, in hope of shaking her constancy, accused her of being a Christian.

St. Agnes was brought before a judge and remained unswayed by either his kindness or his threats. Fires were kindled, instruments of torture were placed before her eyes, but, immovable in her constancy, she surveyed them with heroic calmness. She was sent to a house of prostitution, but the sight of her inspired such awe that not one of the wicked youths of the city dared approach her. One, bolder than the others, was suddenly struck with blindness and he fell trembling.

The youthful Saint came forth from this den of inflamy uncontaminated in mind and body, and still a pure spouse of Christ. Her most prominent suitor was so enraged that he incited the judge still more against her. The heroic Virgin was condemned to be beheaded. “She went to the place of execution, “ says St. Ambrose, “more cheerfully than others fo to their wedding.”

Amid the tears of the spectators the instrument of death fell, and St. Agnes went to meet the Immortal Spouse Whom she had loved better than her life. She was buried on the Via Nomentana, and Constantine erected a church in her honor.

PRAYER: All-powerful and ever-living God, You choose the weak in this world to confound the powerful. As we celebrate the anniversary of the martyrdom of St. Agnes, may we like her remain constant in Faith. Amen.
Saint of the Day
3. St. Thomas, Apostle
We Remember
July
Merciful Jesus, grant them eternal rest.