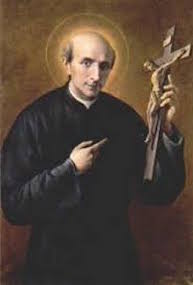 Born in Rome in 1795, St. Vincent became a priest and dedicated himself completely to God and the care of souls. He dreamed of gaining for Christ all non-Catholics, especially the Muslims. Thus he inaugurated a revolutionary program that envisaged the collaboration of the laity in the apostolate of the clergy.

But St. Vincent was also well aware of the many deprivations in the natural sphere that hindered the spread of the Faith. He thus obtained and spent huge sums for the poor and underprivileged. He founded guilds for workers, agricultural schools, loan associations, orphanages and homes for girls—all of which made him the pioneer and precursor of Catholic Action.

The Saint’s greatest legacy was the congregation that he founded for urban mission work, known as the “Society for Catholic Action.” This indefatigable laborer for Christ died in 1850 from a severe cold that he most likely caught on a rainy night after giving his cloak to a beggar. He was canonized in 1963 by Pope John XXIII.

PRAYER: God, You taught Your Church to observe all the heavenly commandments in the move of God and neighbor. Help us to practice works of charity in imitation of Your Priest St. Vincent and merit to be numbered among the Blessed in Your Kingdom. Amen.
Saint of the Day
3. St. Katharine Drexel, Virgin3. St. Cunegundes, Empress
We Remember
March
Merciful Jesus, grant them eternal rest.
Mass Schedule:
7:30 AMMonday:
7:30 AMTuesday:
7:30 AMWednesday:
7:30 AMThursday:
7:30 AMFriday:
8:00 AMSaturday:
8:00 AMSunday:
8:00 AMHolidays:
Holy Hour - Adoration:
Thursday before First Friday: 7:00 - 8:00 PM