24. St. Francis de Sales, Bishop and Doctor of the Church

St. Francis de Sales, Bishop and Doctor of the Church 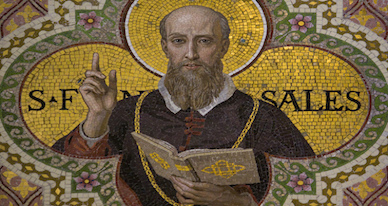 St. Francis, son of the Count de Sales, was born near Anency in Savoy, in 1567. Showing an early inclination for the ecclesiastical state he received tonsure at eleven years of age. Soon afterward, he was sent to Paris to study Philosophy and Theology. He went on to the University of Padua where he was honored with a Doctorate in both Canon and Civil Law.

On his return home , with the reluctant consent of his parents who had envisioned other things for him, Francis entered the priesthood. A little later, he took upon himself the arduous mission of Chablais, where Calvinism had obtained a stronghold. In the midst of the most enormous difficulties, he pursued his labor with apostolic heroism, and was reworded with the most wonderful fruits of conversion. While engaged in this work he received his appointment as coadjutor to the Bishop of Geneva, whom he succeeded as Bishop in 1602.

The Saint now began to labor zealously in his diocese for the clergy and people, and extended his labor elsewhere, preaching the Lenten sermons at various places outside of the diocese. He also composed several instructive works for the edification of the faithful. In 1610, he founded the Order of the Visitation, with the help of the Baroness de Chantal, now St. Jane Frances.

In the midst of his constant pastoral work Francis found time to write the book that has made him known to succeeding ages: “Introduction to a Devout Life (1609). It shows hoe ordinary life can be sanctified; no problem is too small for its author: dress, entertainments, flirtations, etc. His one concern is how to lead the reader to the love of God and the imitation of Christ.

In an age when fanaticism was the rule in controversies, Francis manifested an exceptional restraint and meekness. His pastoral zeal, which was anxious for the sanctification of the laity and the adaption of the religious life to the new needs, marks a turning point in the history of spirituality. He died on December 28, 1622, with the words “Jesus” on his lips, and was canonized in 1665 by Pope Alexander VII.

PRAYER: Father in heaven, You prompted St. Francis de Sales to become all things to all for the salvation of all. May his example inspire us to dedicated love in the service of our brothers and sisters. Amen.
Saint of the Day
3. St. Katharine Drexel, Virgin3. St. Cunegundes, Empress
We Remember
March
Merciful Jesus, grant them eternal rest.
Mass Schedule:
7:30 AMMonday:
7:30 AMTuesday:
7:30 AMWednesday:
7:30 AMThursday:
7:30 AMFriday:
8:00 AMSaturday:
8:00 AMSunday:
8:00 AMHolidays:
Holy Hour - Adoration:
Thursday before First Friday: 7:00 - 8:00 PM