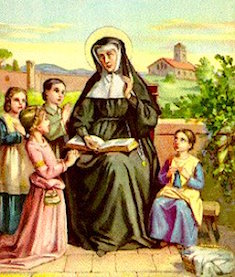 Born in 1474 at Desenzano on the shore of Lake Garda, Italy, St. Angela Merici became a tertiary of St. Francis at fifteen years of age. In a vision God revealed to her that she would establish a “company” to promote the welfare of souls. At Desenzano she established a school for the instruction of young girls and a second school at Brescia. She gathered around her twelve religious companions and founded the Ursulines at Brescia.

St. Angela was of a reflective bent and possibly the first to grasp the changed role of women in the society transformed by the Renaissance. She envisaged that those who joined her would remain in the world but devote themselves to every type of corporal and spiritual work of mercy, with special emphasis on education.

However, her idea of education was very different from that of a convent school. The Saint preferred to send her followers to teach girls in their own families. Through this she hoped to effect an improvement in social conditions. For it was her belief that “disorder in society is the result of disorder of the family.” Her idea of a religious order of women without distinctive habit and without solemn vows and enclosure was also in advance of her times—although her Order was obliged to adopt the canonical safeguards then required of all nuns. On November 25, 1535, the solemn canonical institution of the company of St. Ursula took place in the Oratory of the Piazza del Duomo. As a patron, St. Angela chose St. Ursula because ever since her martyrdom St. Ursula was regarded as the ideal type of Christian virginity.

In the year of Angela’s death, 1540, it was estimated that at least half the town of Brescia was Lutheran of Calvinist. However, the schools of the Ursulines did their share in strengthening and extending Catholicism and in safeguarding Italy from what is now termed “modern unbelief.” She was canonized in 1807 by Pope Pius VII.