28. St. Thomas Aquinas, Priest and Doctor of the Church

St. Thomas Aquinas, Priest and Doctor of the Church 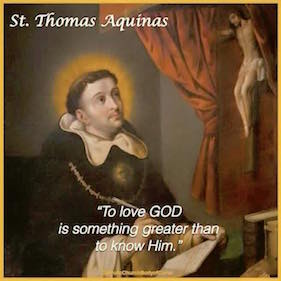 Patron of Schools and Students

St. Thomas, born toward the end of 1226, was the son of Landuph, Count of Aquino, who, when St. Thomas was five years old, placed him under the care of the Benedictines of Monte Cassino. His teachers were surprised at the progress the boy made, for he surpassed all his fellow pupils in learning as well as in the practice of virtue.

When he became of age to choose his state of life, St. Thomas renounced the things of this world and resolved to enter the Order of St. Dominic in spite of the opposition of his family. In 1243, at the age of seventeen, he joined the Dominicans of Naples. Some members of his family resorted to all manner of means over a two-year period to break his constancy. They even went so far as to send an impure woman to tempt him. But all their efforts were in vain, and St. Thomas persevered in his vocation. As a reward for the Saint’s fidelity, God conferred upon him the gift of perfect chastity, which has merited for him the title of the Angelic Doctor.

After making his profession at Naples, Thomas studied at Cologne under the celebrated St. Albert the Great. Here he was nicknamed the “Dumb Ox” because of his silent ways and huge size, but he was really a brilliant student. At the age of twenty-two, he was appointed to teach in the same city. At the same time he also began to publish his first works. After four years he was sent to Paris. The Saint was then a priest. At the age of thirty-one he received his Doctorate.

At Paris, he was honored with the friendship of the King, St. Louis, with whom he frequently dined. In 1261, Urban IV called him to Rome, where he was appointed to teach, but he positively declined to accept and ecclesiastical dignity. St. Thomas not only wrote (his writings fill twenty hefty tomes characterized by brilliance of thought and lucidity of language), but he preached often and with the great fruit. Clement IV offered him the Archbishopric of Naples, which he also refused.

He left the great monument of his learning, the Summa Theologica, unfinished, for on his was to the Second Council of Lyons, ordered there by Gregory X, he fell sick, and died at the Cistercian monastery of Fossa Nuova in 1274. He was canonized in 1323 by Pope John XXII.

PRAYER: Father of wisdom, You inspired St. Thomas Aquinas with an ardent desire of holiness and study of sacred doctrine. Help us, we pray, to understand what he taught and to imitate what he lived. Amen.
Saint of the Day
8. Immaculate Conception of the Blessed Virgin Mary
We Remember
December
Merciful Jesus, grant them eternal rest.
Mass Schedule:
7:30 AMMonday:
7:30 AMTuesday:
7:30 AMWednesday:
7:30 AMThursday:
7:30 AMFriday:
8:00 AMSaturday:
8:00 AMSunday:
8:00 AMHolidays:
Holy Hour - Adoration:
Thursday before First Friday: 7:00 - 8:00 PM