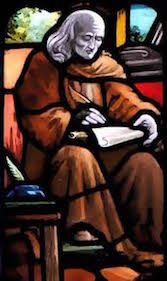 Born about 500 in the Valley of the Clyde, St. Gildas was a celebrated teacher and the first British historian. The fact of his life are uncertain. According to the earliest version we possess, he was forced to flee to Wales, where he married and after his wife’s death, became a pupil of St. Illtyd. After spending some time in Ireland, he made a pilgrimage to Rome about 520 and founded a religious house at Ruys in Brittany on his way back, reaching Wales in 527. Later he visited Ruys and Ireland again and died at Ruys on January 29, 570, surrounded by his disciples.

St. Gildas wrote a famous history condemning British vice, which is the only history of the Celts. It covers the period from the coming of the Romans to Gilda’s own time, but its purpose is more hortatory than strictly historical. Hence, it may have taken an exaggerated view of the evils of its times. St. Gildas also wrote some penitential canons.

PRAYER: Lord, amid the things of this world, let us be wholeheartedly committed to heavenly things in imitation of the example of evangelical perfection that You have given us in St. Gildas. Amen.
Saint of the Day
8. Immaculate Conception of the Blessed Virgin Mary
We Remember
December
Merciful Jesus, grant them eternal rest.
Mass Schedule:
7:30 AMMonday:
7:30 AMTuesday:
7:30 AMWednesday:
7:30 AMThursday:
7:30 AMFriday:
8:00 AMSaturday:
8:00 AMSunday:
8:00 AMHolidays:
Holy Hour - Adoration:
Thursday before First Friday: 7:00 - 8:00 PM