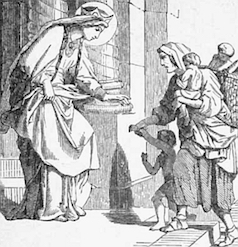 St. Bathildis was an English girl of the 7th century captured by pirates and sold in 641 as a slave to the household of the mayor of the palace at Paris. She was constrained to marry King Clovis II, a foolish and debauched man, and at his death became regent. In this capacity, she struggled against simony and the slave traffic, and also brought about other changes for the good of the people.

The Saint founded the Abbey of Corbie and nunnery of Chelles. In 665, she withdrew to the latter and led a life of prayer and self-denial until her death in 680.

PRAYER: God, you inspired St. Bathildis to strive for perfect charity and so attain Your Kingdom at the end of her pilgrimage on earth. Strengthen us through her intercession that we may advance rejoicing in the way of love. Amen.
Saint of the Day
The First Holy Martyrs of the Holy Roman Church
We Remember
June
Merciful Jesus, grant them eternal rest.
Mass Schedule:
7:30 AMMonday:
7:30 AMTuesday:
7:30 AMWednesday:
7:30 AMThursday:
7:30 AMFriday:
8:00 AMSaturday:
8:00 AMSunday:
8:00 AMHolidays:
Holy Hour - Adoration:
Thursday before First Friday: 7:00 - 8:00 PM