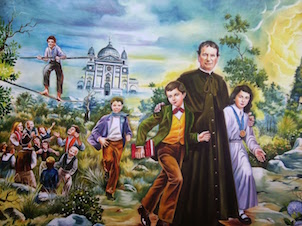 St. John Bosco was born in a poor farm near Turin, Italy, in 1815. At an age when the modern child would be enjoying the pastime of a kindergarten education, he was out on the hillside tending sheep. At about his ninth year, when he expressed the desire to become a priest, it was found possible to let him commence his education by walking more that four miles daily for half a year. The other half, in Spring and Summer. Was spent in the fields.

The day before the Saint entered the seminary, his mother, laying her hands on his shoulders as he stood robed in his clerical dress, said: “to see you dress in this manner fills my heart with joy. But remember that it is not the dress that gives honor to the state, but the practice of virtue. If at any time you come to doubt your vocation, I beseech you, lay it aside at once. I would rather have a poor peasant for my son than a negligent priest. When you come into the world I consecrated you to our Lady; when you began to study I bade you honor her and have recourse to her in all your difficulties; now I beg you to take her for your Queen.”

Today the motto on the Salesian coat of arms: “Give me only souls and keep all the rest”—bears witness to the fidelity of Don Bosco to the words of a truly Christian mother.

This admirable “Apostole of Youth” is almost our contemporary. He founded the Salesian Society of St. Francis of Sales and the Daughter of the Mary Help of Christians. His life’s work was consecrated to the care of young boys and girls. He died in 1888, and was canonized in 1934 by Pope Pius XI.

PRAYER: God of mercy, You called St. John Bosco to be a father and teacher of the young. Grant that inspired by his ardent charity we may serve You alone and never tire of bringing others to Your Kingdom and serving You alone. Amen.
Saint of the Day
8. Immaculate Conception of the Blessed Virgin Mary
We Remember
December
Merciful Jesus, grant them eternal rest.
Mass Schedule:
7:30 AMMonday:
7:30 AMTuesday:
7:30 AMWednesday:
7:30 AMThursday:
7:30 AMFriday:
8:00 AMSaturday:
8:00 AMSunday:
8:00 AMHolidays:
Holy Hour - Adoration:
Thursday before First Friday: 7:00 - 8:00 PM