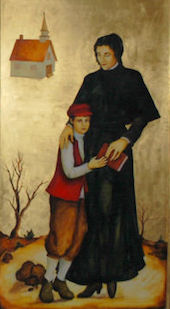 Elizabeth Seton was born in 1774, of a wealthy and distinguished Episcopalian family, probably at Trinity Church in New York, and was a faithful, fervent adherent of the Episcopal Church until her conversion to Catholicism.

In 1794, Elizabeth married William Seton, and they reared five children in the midst of suffering and sickness. Elizabeth and her sick husband traveled to Leghorn, Italy, and there William did. While in Italy, Elizabeth became acquainted with Catholicism and in 1805 she made her Profession of Faith in the Catholic Church.

Elizabeth established her first Catholic school in Baltimore in 1808; in 1809 she established a religious community in Emmitsburg, Maryland.

PRAYER: Lord God, You blessed St. Elizabeth Seton with gifts of grace as wife and mother, educator and foundress, so that she might dedicate her life to the service of Your people. Through he example and prayers may we learn to express our love for You in love for others. Amen.
Saint of the Day
The First Holy Martyrs of the Holy Roman Church
We Remember
June
Merciful Jesus, grant them eternal rest.
Mass Schedule:
7:30 AMMonday:
7:30 AMTuesday:
7:30 AMWednesday:
7:30 AMThursday:
7:30 AMFriday:
8:00 AMSaturday:
8:00 AMSunday:
8:00 AMHolidays:
Holy Hour - Adoration:
Thursday before First Friday: 7:00 - 8:00 PM