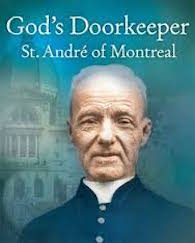 Born near Quebec in 1845, Andre worked in the United States for a few years. Returning to Canada, he entered the Congregation of the Holy Cross as a Brother. Because of poor health as a child, Andre had been unable to attend school regularly and could not read or write. He was assigned as a doorkeeper at the College of Notre Dame in Montreal and remained in that capacity for over forty years. He also performed the tasks of janitor, infirmarian, barber, gardener, and lamplighter. His piety and willingness to help other charmed the students and their parents.

Andre also developed a great devotion to St. Joseph. People flocked to his cell to ask his opinion and his prayers for some favor or some cure, and Andre complied, while entrusting all to St. Joseph, the Spouse of the Virgin Mother of God and foster-father of the Divine Infant. In time, he was able to have a chapel built to St. Joseph. After his death on January 6, 1937, the shrine grew into a great basilica of St. Joseph’s Oratory in Montreal, which is visited by pilgrims from all over the world. He was beatified in 1982 by Pope John II and canonized on October 17, 2010, by Pope Benedict XVI.

PRAYER: O God, friend of the humble, You inspired Brother Andre with great devotion to St. Joseph and singular dedication to the poor and afflicted. Grant us, through his intercession, to follow his example of prayer and charity, so that with him we may attain the splendor of Your glory. Amen.
Saint of the Day
8. Immaculate Conception of the Blessed Virgin Mary
We Remember
December
Merciful Jesus, grant them eternal rest.
Mass Schedule:
7:30 AMMonday:
7:30 AMTuesday:
7:30 AMWednesday:
7:30 AMThursday:
7:30 AMFriday:
8:00 AMSaturday:
8:00 AMSunday:
8:00 AMHolidays:
Holy Hour - Adoration:
Thursday before First Friday: 7:00 - 8:00 PM