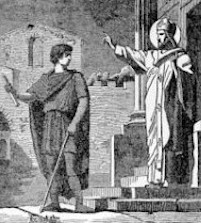 St. Apollinaris was one of the most illustrious Bishop of the 2nd century. Eusebius, St. Jerome, Theodoret, and other speak of him in the highest terms, and they furnish us with the few facts that are known of him.

The Saint addressed an “apology,” that is, a defense, of the Christian religion to the Emperor Marcus Aurelius, who, shortly before, had obtained a signal victory over the Quadi, a people inhabiting the country now called Moravia. One of his legions, the twelfth, was composed chiefly of Christians. When the army was perishing for want of water, the soldiers of this legion fell upon their knees and invoked the assistance of God. The result was sudden, for a copious rain fell, and aided by the storm, they conquered the Germans. The emperor gave this legion the name “Thundering Legion” and mitigated his persecution.

It was to protect his flock against persecution that St. Apollinaris, who was Bishop of Hierapolis in Phrygia, addressed his apology to the Emperor to implore his protection and remind him of the favor he had received from God through the prayers of the Christians. The date of the death of St. Apollinaris is not known, but it probably occurred before that of Marcus Aurelius, about the year 175.

PRAYER: God, You made St. Appolinaris an outstanding exemplar of Divine love and the Faith that conquers the world, and added him to the roll of saintly Pastors. Grant by his intercession that we may persevere in Faith and love and become sharers of his glory. Amen.
Saint of the Day
St. Paschal Baylon, Religious
We Remember
May
Merciful Jesus, grant them eternal rest.
Mass Schedule:
7:30 AMMonday:
7:30 AMTuesday:
7:30 AMWednesday:
7:30 AMThursday:
7:30 AMFriday:
8:00 AMSaturday:
8:00 AMSunday:
8:00 AMHolidays:
Holy Hour - Adoration:
Thursday before First Friday: 7:00 - 8:00 PM