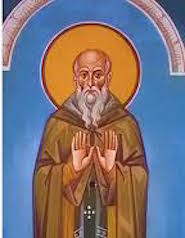 Native of Africa, this learned and saintly man became Abbot of monastery near Monte Casino, Italy. Pope St. Vitalian judged him to be the best person to fill the vacant post of Archbishop of Canterbury, for his talents were most suitable for instructing and nurturing a nation still young in the Faith. But St. Adrian, deeming himself unworthy, suggested St. Theodore of Tarsus in his place. The Pope agreed but sent him along to be the assistant and adviser of the Archbishop.

Setting out in 668, the two holy men proceeding by way of France. There, St. Adrian was arrested by Ebroin, Mayor of Neustria, as an agent of the Eastern Emperor; and St. Theodore alone was able to go on. When St. Adrian was finally able to reach England, he found St. Theodore already confirmed in his See, and was named Abbot of the monastery of Sts. Peter and Paul at Canterbury.

Under St. Adrian’s administration, this monastic school attracted students from all over and had a far-reaching influence. The Saint himself was learned in the Scriptures, well versed in the Fathers of the Church, and a fine Greek and Latin scholar. All these subject were taught there, as well as poetry, astronomy, and calendar calculation. St. Adrian died on January 9, 710.

PRAYER: Lord, amid the things of this world, let us be wholeheartedly committed to heavenly things in imitation of the example of evangelical perfection You have given us in St. Adrian the Abbot. Amen.
Saint of the Day
St. Paschal Baylon, Religious
We Remember
May
Merciful Jesus, grant them eternal rest.
Mass Schedule:
7:30 AMMonday:
7:30 AMTuesday:
7:30 AMWednesday:
7:30 AMThursday:
7:30 AMFriday:
8:00 AMSaturday:
8:00 AMSunday:
8:00 AMHolidays:
Holy Hour - Adoration:
Thursday before First Friday: 7:00 - 8:00 PM