17. The Blessed Martyrs of Compiegne

The Blessed Martyrs of Compiegne 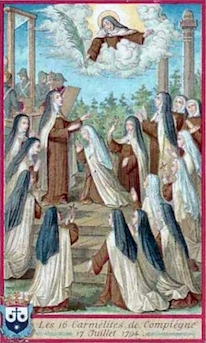 In October, 1789, in the first fervor of the French Revolution, the National Assembly suspended all monastic vows, and in February, 1790, it decreed that these vows were not recognized by the law. Two months later, it instructed local assemblies to inventory all monastic goods. The official in charge of this at Compiegne was a former monk of Cluny, and in August he took inventory of the Carmel located there.

The Carmel was made up of sixteen sisters. Two were golden Jubilarians and one was ready for profession when the ban had been levied. The Prioress was Mother Theresa of St. Augustine, and all the nuns were committed to the royal family of France. The holy women immediately saw through the protestations of liberation mouthed by the public officials and rejected the opportunity set before them to go out into the new world of enlightenment.

At first, the nun were allowed to receive state pensions equal to their monastic property, but in September, 1792, they were cast out of their convent and obliged to live as private citizens. Yet they remained undaunted in their desire to retain their religious way of life. Dividing themselves into groups, they continued to follow their Rule. This continuation of their monastic life, coupled with their previous renunciation of the oath of allegiance to the new constitution, brought about the arrest and imprisonment of the nuns, on June 22, 1794.

On July 17, after having suffered brutalities and indignities in being transferred to Paris, the sixteen nuns were led before the revolutionary tribunal. They conducted themselves with the utmost courage and wisdom, clearly bringing out the point that were being condemned for the Catholic faith.

As they forth to the place of execution, these holy women sang the Salve Regina (“Hail Holy Queen”) and Veni Creator (“Come, Holy Spirit”), and their saintly demeanor reduced the astonished crowd to silence. On reaching the scaffold, they renewed the vows of their Baptism and religious profession. Then as they individually went forth to give their lives for their Divine Bridegroom they kept singing “Praise the Lord, all you nations” in steadily diminishing chorus. They thus bore a unique collective witness to Christ, with a joy that no one could take from them! They were beatified in 1906 by Pope Pius X.

PRAYER: God, You surround and protect us by the glorious confession of Your holy Martyrs. Help us to profit from their example and be supported by their prayers. Amen.