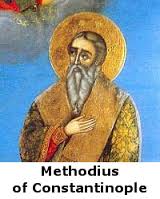 The son of rich and distinguished Sicilian, St. Methodius received an excellent education in his native Syracuse. He went to Constantinople to obtain a position at court, but instead decided to enter the religious life. He constructed a monastery on the island of Chios and was then summoned to Constantinople by its patriarch St. Nicephorus.

When the second Iconoclastic persecution erupted, under Leo the Armenian. St. Methodius fearlessly defended the cult of sacred images. After the deposition and exile of St. Nicephorus, however, St. Methodius was commanded to bring Pope paschal I an account of the state of things in the Near East. So he made his way to Rome and remained there until Leo’s death. In 821, he returned under the new Emperor Michael the Stammerer, but was flogged, deported, and confined on the island of Antigoni in the Propontus for seven years.

Upon the death of the Emperor in 842, his widow Theodora became Regent for her infant son Michael III, and she appointed St. Methodius Patriarch of Constantinople. The holy man—rendered a scarecrow of his former self by his suffering and provations—immediately convoked a Council, which reaffirmed the lawfulness of venerating sacred images. To stress this fact, an annual Feast of Orthodoxy was instituted, and it continues to be observed on the First Sunday of Lent in all Byzantine Churches.

This heroic Patriarch, who went to his heavenly reward on June 14, 847, was a prolofoc writer but we possess only fragments of his many poetical, theological, and controversial works, and a complete Life of St. Theophanes.

PRAYER: God, Light and Shepherd of souls, You established St. Methodius as Bishop in Your Church to feed Your flock by his word and form it by his example. Help us through his intercession to keep the faith he taught by his word and follow the way he showed by his example. Amen.
Saint of the Day
St. Anthony, Founder of Monasticism
We Remember
January
Merciful Jesus, grant them eternal rest.
Mass Schedule:
7:30 AMMonday:
7:30 AMTuesday:
7:30 AMWednesday:
7:30 AMThursday:
7:30 AMFriday:
8:00 AMSaturday:
8:00 AMSunday:
8:00 AMHolidays:
Holy Hour - Adoration:
Thursday before First Friday: 7:00 - 8:00 PM