24. Nativity of St. John the Baptist

Nativity of St. John the Baptist 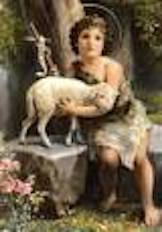 The feast of the Nativity, or birthday, of St. John the Baptist, the precursor of the Messiah and born six months before Him, is observed on June 24, and is one of the oldest feasts in the Liturgy of the Church. He was the son of Zechariach and Elizabeth, a cousin of the Blessed Virgin Mary. Tradition places the home and birthplace of the Baptist near the village of Ain-Karim, six miles west of Jerusalem, where a Franciscan church marks the site. The church is called “St. John in the Mountains”.

What we know of this Saint, than whom a greater prophet had not arisen, from his sanctification before his birth to his martyrdom under King Herod, is set down in Holy Scripture. He has always had a chief place in the veneration given by Holy Church to the heroic servants of God. While the feast of other Saints is celebrated on the day of their death, when final victory is won, the birthday of St. John the Baptist is his feast day, aas he was “filled with the Holy Sprit even from his mother’s womb” (Catechism of the Catholic Church, no. 717). We have also the feast of the Birth of Immaculate Mary.

Thirty years after the birth of Jesus, John began his mission on the banks of the Jordan. He was the last of the Prophets of the Old Covenant. His work was to prepare the way and announce the coming of the long-expected Messiah, the Redeemer, in Whom all flesh would see “the salvation of God”.
Before St. John was born, ah angel announced that “many would rejoice in his birth,” and so June 24 is ranked among the joyous feasts of the year. In former times, and in other lands, it was observed with greater holiday rejoicing and greater outward display than in our age. On the eve of St. John’s day “ST. John’s fires” were lighted on the hills and mountains in many countries, as they are still lighted in some places. “Scarce had the last rays of the setting sun died away, when all the world over, immense columns of flame arose from every mountain top, and in an instant every town and village and hamlet was lighted up.” (Dom. P. L. P. Guéranger)

PRAYER: God, You raised up St. John the Baptist to prepare a perfect people for Christ. Fill Your people with the joy of possessing Your grace and direct the minds of all the faithful in the way of peace and salvation. Amen.