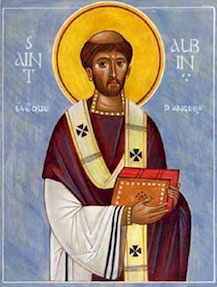 St. Albinus was born of a noble family of Brittany. In his early youth he was fervent in the practice of piety and embraced the monastic state at Cincillae, near Angers. In 504, at thirty-five years of age, he was chosen Abbot, which office he filled for twenty-five years, until he became Bishop of Angers. He governed his diocese until his death, which occurred about the year 550.

As a monk, St. Albinus was a perfect model of virtue, especially of prayer, mortification of the senses, and obedience. He was entirely dead to himself, living only for Christ. As Bishop, he governed his See with zeal, restoring discipline everywhere, while in his private conduct he lived the same life of sanctity as he had liven when a monk. His humility equaled his other virtues, so that he looked on himself as the most unprofitable among the servant of God.

PRAYER: God, Light and Shepherd of souls, You established St. Albinus as Bishop in Your Church to feed Your flock by his word and form it by his example. Help us through his intercession to keep the Faith he taught by his word and follow the way he showed by his example. Amen.
Saint of the Day
St. Gildas the Wise, Abbot
We Remember
January
Merciful Jesus, grant them eternal rest.
Mass Schedule:
7:30 AMMonday:
7:30 AMTuesday:
7:30 AMWednesday:
7:30 AMThursday:
7:30 AMFriday:
8:00 AMSaturday:
8:00 AMSunday:
8:00 AMHolidays:
Holy Hour - Adoration:
Thursday before First Friday: 7:00 - 8:00 PM