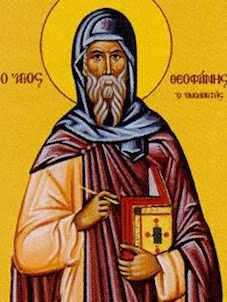 Men seemed to be constantly obstructing all the personal aspirations of the Theophanes, who was born in Samothrace, Greece, about 759. Possessed of wealth and worldly influence, he was first obliged to marry in spite of his reservations. When his wife entered a convent, with his complete accord, he left the court of Constantine V, and retired to live in solitude. But he was soon involved in founding two monasteries and constrained to act as Abbot of the one on Mount Sigriana.

Theophanes turned his hand to research and wrote a chronography or history of the world. But even here he ran into obstacles. His studies were interrupted by the persecution of Leo the Armenian over the Iconoclast controversy concerning ikons. Because of his constancy in the Faith, this saintly scholar was imprisoned and sent into exile, and in 817 he ultimately died from the mistreatment he incurred.

Throughout all these contradictions and trials, St. Theophanes maintained his love for God, and the Lord made everything work out for his good.