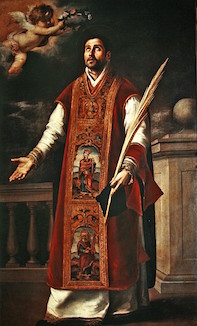 Roderick (or Rodriguez) was a priest living in 9th century Spain at the time of the Moorish dominion and persecution. He had two brothers—one had come a Muslim and the other had practically abandoned the Faith. One day, while trying to break up a violent quarrel between the two, Roderick was beaten senseless by both of them. His Muslim brother then carried him through the streets, publicly proclaiming that Roderick had renounced Christ and wished to die a Muslim. Roderick, too ill to speak out, suffered in silence, but as soon as he got well he escaped from his brother’s hands.

His brother sought out Roderick and had him brought before the kadi or judge on the charge of having returned to the Christian Faith after embracing Islam. The Saint protested fiercely, declaring that he had never himself denied the Faith: but the judge refused to believe him and relegated him to one of the worst dungeons in the city of Cordova.

While in the dungeon, Roderick befriended Solomon, another Christian charged with the same offense. The two dedicated followers of Christ encouraged one another during the lengthy imprisonment, which had been designed to shake their constancy. Seeing that his original stratagem did not work, the judge had them set apart for a time; but when this also failed to achieve the desired retractions, he condemned both of them to be beheaded, in 857.

St. Eulogius (who was eventually martyred during that same persecution: see March 11) witnessed their bodies lying near a river, and saw the soldiers throwing the stones reddened by the Saints’ blood into the river to make sure that the Christians could not make relics of them.

PRAYER: Almighty, ever-living God, You enabled Sts. Roderick and Solomon to fight to the death for justice. Through their intercession enable us to bear all adversity and with all our strength hasten to You Who alone are life. Amen.
Saint of the Day
3. St. Thomas, Apostle
We Remember
July
Merciful Jesus, grant them eternal rest.