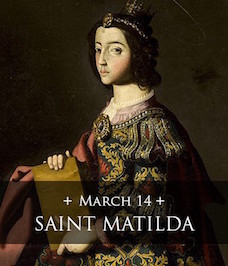 St. Mathilda was the daughter of Theodoric, a Saxon Count. At an early age she was placed in the monastery of Erfurt under the care of Maud, her grandmother, who was Abbess of the monastery that she had entered after the death of her husband. Here St. Mathilda learned needlework and acquired the love of labor, prayer, and spiritual reading. She remained in the convent until her parents gave her in marriage, in 913, to Henry “the Fowler,” so-called from his fondness for hawking. He became Duke in 916 on the death of his father, and in 919 he was chosen to succeed Conrad as King of Germany.

The ious Queen adorned the throne by her many virtues. She visited and comforted the sick and the afflicted, instructed the ignorant, succored prisoners, and endeavored to convert sinners, and her husband concurred with her in her pious undertakings. After twenty-three years of married life King Henry died, in 936. No sooner had he expired than she had a Mass offered up for the repose of his soul, and from that moment she renounced all worldly pomp.

Of Mathilda’s three sons, Otto afterward became Emperor, Henry was Duke of Bavaria, and St. Bruno edified the Church as Archbishop of Cologne. Otto became King of Germany in 937, and in 962 he was crowned Emperor at Rome. In the contest between her two sons, Otho and Henry, for the crown that was elective, the Queen favored the former, a fault she expiated by great suffering, for both these sons subjected her to a long and cruel persecution. She died in 968.

PRAYER: God, You gladden us each year by the feast of St. Mathilda. Grant that as we honor her in such festivities we may also imitate her example in our conduct. Amen.
Saint of the Day
St. Thomas Aquinas, Priest and Doctor of the Church
We Remember
January
Merciful Jesus, grant them eternal rest.
Mass Schedule:
7:30 AMMonday:
7:30 AMTuesday:
7:30 AMWednesday:
7:30 AMThursday:
7:30 AMFriday:
8:00 AMSaturday:
8:00 AMSunday:
8:00 AMHolidays:
Holy Hour - Adoration:
Thursday before First Friday: 7:00 - 8:00 PM