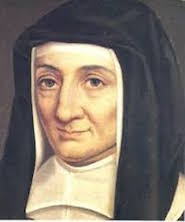 St. Louise de Marillac was born on August 15, 1591. In 1613, she married Antoine le Grass, who died thirteen years later, leaving Louise with a young son. She became a nun, and in 1625 chose St. Vincent de Paul, then known as Monsieur Vincent, as her spiritual director.

With the help of Monsieur Vincent, Louise established the Daughters of Charity, Servants of the Sick Poor, dedicated to the corporal and spiritual service of the poor in their homes. She died in 1660, and was canonized in 1934 by Pope Pius XI.

PRAYER: God, You inspired St. Louise to strive for perfect charity and so attain Your Kingdom at the end of her pilgrimage on earth. Strengthen us through her intercession in the way of love. Amen.
Saint of the Day
St. Thomas Aquinas, Priest and Doctor of the Church
We Remember
January
Merciful Jesus, grant them eternal rest.
Mass Schedule:
7:30 AMMonday:
7:30 AMTuesday:
7:30 AMWednesday:
7:30 AMThursday:
7:30 AMFriday:
8:00 AMSaturday:
8:00 AMSunday:
8:00 AMHolidays:
Holy Hour - Adoration:
Thursday before First Friday: 7:00 - 8:00 PM