18. St. Cyril of Jerusalem, Bishop and Doctor of the Church

St. Cyril of Jerusalem, Bishop and Doctor of the Church 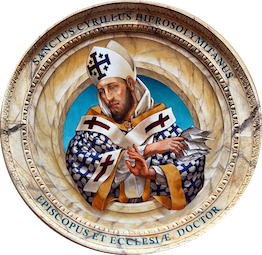 St. Cyril was born in the vicinity of Jerusalem about the year 315. Having made great progress in the knowledge of the pagan philosophers and the Fathers of the Church, but above all in the Sacred Scriptures, he was ordained priest about the year 345 by Maximus, Bishop of Jerusalem.

About the end of the year 350 St. Cyril succeeded Maximus in the See of Jerusalem and entered upon episcopal office at a time when the Church was distracted by the Arian heresy. A difference arose between him and Acacius, the Aria Bishop of Caesarea, who claimed jurisdiction over the Church of Jerusalem, a claim to which St. Cyril did nor submit. He was forced to take refuge at Tarsus for a time. At the death of Constantius and the accession of Julian, he was restored to his See.

St. Cyril witnessed the vain attempt of Julian the Apostate to rebuild the temple of Jerusalem with the concomitant miraculous circumstances that accompanied it. It is said that Julian had determined to put an end to the life of the holy man after his Persian expedition, but death prevented the execution of his design.

St. Cyril was once more driven from his See in 367 by the Arian Emperor Valens, but he returned to it in 378 at the accession of Gratian. In 381, he assisted at the General Council of Constantinople and formally accepted the full Nicene Creed. He died in the year 386.

PRAYER: God, through St. Cyril You miraculously unified Your Church that she might more fully grasp the mysteries of salvation. Through his intercession help us acknowledge Your Son and so obtain more abundant life. Amen.
Saint of the Day
3. St. Thomas, Apostle
We Remember
July
Merciful Jesus, grant them eternal rest.