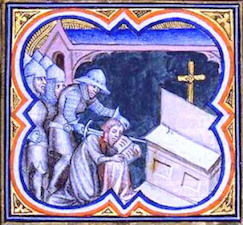 In 1086, St. Canute, king of Denmark and father of Blessed Charles the Good, was slain in St. Alban’s Church, Odense. Charles who was only five yeas old taken by his mother to the court of Robert, Count of Flanders, his maternal grandfather. When he grew up, he became a knight and accompanied Robert in a crusade to the Holy Land where he distinguished himself; on their return, Charles also fought against the English with his uncle.

On Robert’s death, his son Baldwin succeeded him and designated Charles as his heir. At the same time, he arranged for Charles’s marriage to the daughter of the Count of Clermon. During Baldwin’s rule, Charles was closely associated with him, and the people came to have a high regard for his wise and beneficent ways as well as his personal holiness. At Baldwin’s death, in 1119, the people made his cousin their ruler.

Charles ruled his people with wisdom, diligence, and compassion; he made sure that times of truce were respected and fought against black marketers who hoarded food and were waiting to sell it at astronomical prices to the people. This incurred their undying wrath and one day (in 1127) as Charles was praying in the church of St. Donatian they set upon him and killed him.

PRAYER: Almighty, ever-loving God, You enabled Blessed Charles to fight to the death for justice. Through his intercession enable us to bear all adversity and with all our strength hasten to You Who alone are life. Amen.
Saint of the Day
3. St. Thomas, Apostle
We Remember
July
Merciful Jesus, grant them eternal rest.