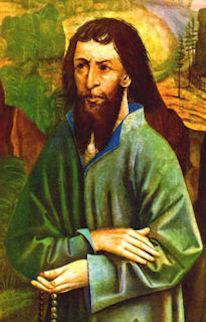 This great Saint and Father of his country was born in the Canon of Unterwalden on the Lake of Lucerne, Switzerland, in 1417. At the age of thirty or so, he married a farmer’s daughter, Dorothy Wiss, who bore him ten children. He also proved to be a capable farmer, military leader, member of the assembly, councilor, judge, and a person of complete moral integrity.

At the same time, St. Nicholas led a life of contemplative prayer and rigorous fasting. After twenty years of married life, he received God’s call to leave the world and his family and become a hermit. Thus in 1467 with the heroic consent of his wife he settled in a hermitage at Ranft within a few miles of his home. It is said that for nineteen years he lived there without benefit od food or drink, taking only the Eucharist. His reputation for sanctity grew and many came from all parts of Europe to seek his advice.

The enormous influence of this holy man of God exhibited itself in 1481 while a dispute arose between the delegates of the Swiss confederates at Stans and there was a real and imminent threat of civil war. An appeal was made to St. Nicholas who worked through the night and came up with a set of proposals that all could agree on. Switzerland had been saved.

St. Nicholas died six years later (March 21, 1487), surrounded by his wife and children. He is honored by Swiss Protestant and venerated by Swiss Catholics.

PRAYER: Lord God, You alone are holy and no one is good without You. Through the intercession of St. Nicholas help us to live in such a way that we may not be deprived of a share in Your glory. Amen.
Saint of the Day
3. St. Thomas, Apostle
We Remember
July
Merciful Jesus, grant them eternal rest.