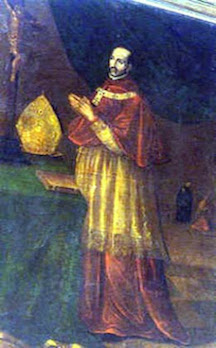 Born in 1538 at Majorca, Spain, St. Toribio became a Professor of Law at the University of Salamanca and was appointed president of the court of the Inquisition at Granada. In 1581, while still a layman he was appointed to the See of Lima, Peru—a most difficult charge both religiously and geographically.

For the next twenty-five years, this saintly man wore himself out in the service of his flock. He traversed his entire diocese on foot, willingly exposing himself to the steaming climate, wild animals, tropical maladies, and other dangers in order to reform the clergy and instruct the people in the Faith. He founded the first seminary on the American continent and baptized and confirmed close to a million people.

The Saint took pains to learn the native languages of the people (in which he was associated with St. Francis Solano) and opposed all attempts to justify their mistreatment by the Spanish. Thus, he exerted a great influence on other South American countries also.

St. Toribio was ever solicitous of the feelings of the poor and unstinting in his charities toward them. In the course of his ministrations he also befriended and confirmed St. Rose of Lima. He died in 1606 and was canonized in 1726 by Pope Benedict XIII.

PRAYER: God, You increased Your Church by means of the apostolic care and zeal for truth of St. Toribio, Your Bishop. Grant that the people who have been consecrated to You may experience a new increase of Faith and holiness. Amen.
Saint of the Day
3. St. Thomas, Apostle
We Remember
July
Merciful Jesus, grant them eternal rest.