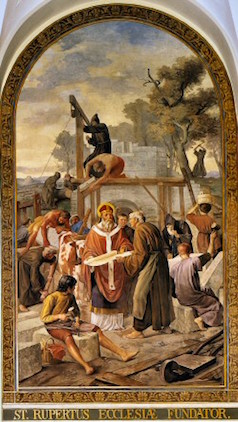 St. Rupert, a Frank by nationality, was Bishop of Worms until the last years of the 7th century (697) when he became a missionary to Regensburgh in Bavaria. After converting and baptizing Duke Theodo, without whose permission nothing could take place in the territory, St. Rupert and his followers converted many of the nobles and encountered no serious opposition to their work of evangelization among the people.

Meeting with conspicuous success at Regensburg, the zealous Bishop went on to Altotting and then extended his activities over a wide area along the Danube—always with great success. As his center, he took the old ruined town of Juvavum, which he renamed Salzburg, and rebuilt.

In addition to Christianizing the people and building churches and monasteries for them, this holy man also civilized his converts and promoted the development of the salt mines of Salzburg. He thus contributed to the bodies and souls of his flock. The Lord called this devoted servant to his reward on Easter Sunday about the year 718.

PRAYER: God, you built up Your Church by means of the religious zeal and apostolic care of St. Rupert. Grant by his intercession that she may ever experience a new increase of Faith and holiness. Amen.
Saint of the Day
3. St. Thomas, Apostle
We Remember
July
Merciful Jesus, grant them eternal rest.