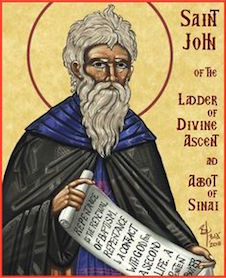 St. John, called Climacus from his book The Ladder (Climax) of Paradise, was born about the year 570. At the age of sixteen he renounced all worldly goods to dedicate himself to God in the religious state. For forty years he lived as a solitary in his hermitage at the foot of Mount Sinai.

Such was his reputation that St. Gregory the Great, who was then Pope, wrote to him recommending himself to his prayers and sent him gifts for his hospital near Mount Sinai.

At the age of seventy-five John was chosen Abbot of Mount Sinai and superior-general of all the monks and hermits in the region.

This holy Abbot never sought either glory or fame. He endeavored to hide the natural and supernatural gifts with which he was endowed, in order the better to practice humility.

John’s famous work, the Climax, was written only in deference to the will of another. It is a spiritual treatise consisting of concise sentences, and affording several examples that illustrate the monastic life of that period.

The Saint governed the monastery of Mount Sinai for four years, sighing constantly under the weight of his dignity, which he resigned shortly before his death. Heavenly contemplation and the continual exercise of divine love and praise were his delight and comfort in his earthly pilgrimage.

On March 30, 649, the blessed life of this great Saint came to an end in the hermitage that had witnessed his uninterrupted communing with God. From the time he entered the monastic state, St. John had earnestly applied himself to root out of his heart self-complacency in his actions; he practiced silence as a means of acquiring humility, and he made it a rule never to contradict, never to dispute with anyone. He appeared to have no will of his own, so great was his submission.

PRAYER: Lord, amid the things of this world, let us be wholeheartedly committed to heavenly things in imitation of the example of evangelical perfection You have given us in St. John the Abbot. Amen.
Saint of the Day
St. Gildas the Wise, Abbot
We Remember
January
Merciful Jesus, grant them eternal rest.
Mass Schedule:
7:30 AMMonday:
7:30 AMTuesday:
7:30 AMWednesday:
7:30 AMThursday:
7:30 AMFriday:
8:00 AMSaturday:
8:00 AMSunday:
8:00 AMHolidays:
Holy Hour - Adoration:
Thursday before First Friday: 7:00 - 8:00 PM